If you are familiar with some Microgaming titles, you might notice a few subtle differences to Reel Thunder – it has a few improved technical details like the bet button being moved to the screen side that sounds like good news for mobile owners. But aside from that, Microgaming decided to go full classics: they came up with a traditional slot machine with a modern feel and functional gameplay. So in case you are fond of hogs, biking life, fruit motifs and contemporary functionality, Reel Thunder would be your heavenly match for today. Classic road-styled Americana brings a new direction to the genre, even though gamblers might not get too impressed by the variety of features. The thing is Microgaming clearly wanted to place a special focus on symbolics, graphics and visuals rather than bonus effects.

What’s more, Reel Thunder has a fabulous mobile compatibility. When it comes to portable devices, Microgaming know their business tightly, so you would barely find any shortcomings to a portable version of the slot machine. Both mobile and computer options represent a colorful, dynamic, fast-paced, old-school game which has enough to keep players entertained for any length of time. Specialty symbols like Scatters and Wilds are going to rock the screen, next to unique regulars on the reels. It is great that classics is sometimes revived by modern perks. And one thing for sure: Reel Thunder makes a great company, especially if you are on the road – this machine boasts with the traveling spirit so that you immediately want to turn some good old rock-and-roll on and get the max out of your engine. 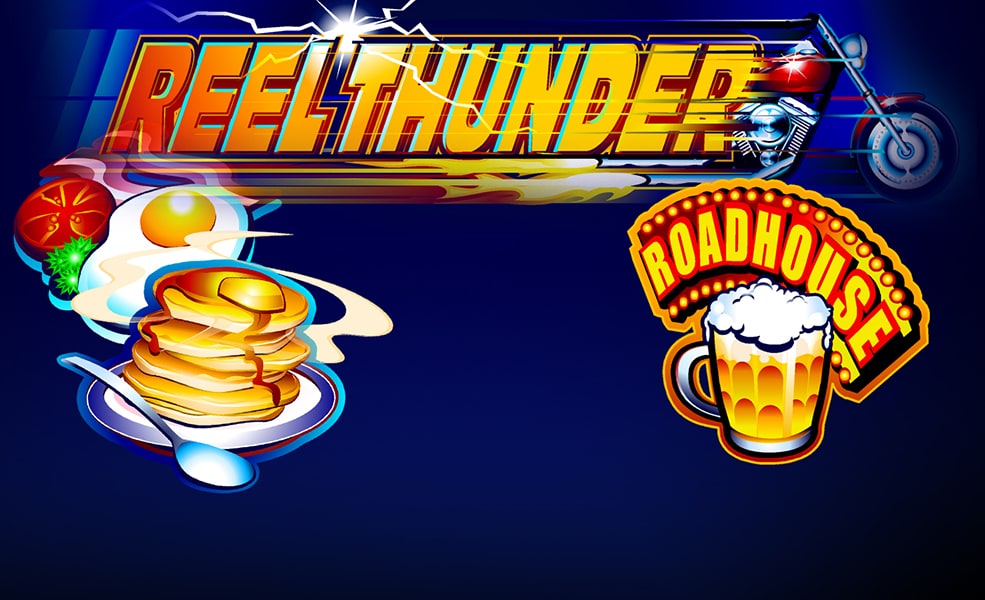 Remember an American dinner along route 66 far away from busy city life where travelers have their peaceful rest among hot dogs and tasty pancakes. That would make a perfect description for Reel Thunder. Roadhouses, blazing bikes, speed and a mug of beer after a long way on the road are all perpetuated in this game’s symbols. Interestingly animated and depicted, they add an atmosphere of specialty that rarely can be seen throughout slots. Even though stakes-with-bikes is a beaten path for the iGaming industry, just like Chinese festivals or Egyptian treasures, old-school American is never a boring tune.

The backdrop of Reel Thunder is a striking mixture of bright blue hues that might be a subtle allusion to water or sky which are usually associated with bikers, so Microgaming picked all the right colors to fill the blanks. The chorus of revving engines and arcade sound effects complements the atmosphere of freedom, and as soon as you get a winning combinations, you feel this whole rush of emotions due to excellent soundtrack. In a simple style lies big-time attraction, and Microgaming seem to understand this crucial aspect about simplicity. So, Reel Thunder handles theme questions with a high score.

Now let’s find out how Reel Thunder handles features and additionalities. A quick remark: if you are a gambler with large slot luggage, you can be even pissed off by the variety. However, as it comes clear, Reel Thunder does not mean to amaze with features as it is made with a simple traditional scheme in mind. Technically there are just two additional features to the main gameplay: Scatters with a multiplying function (no freespins or other extra rounds here) and Wildcards taming all the same job.  You will not explore the deep world of additionality simply because there is nothing to explore. But in some notion that’s for the best. Microgaming have a plenty of options when features stand as a main priority.

Wild Symbols: a famous tattoo of a heart with wings and exhaust pipes represent a Wildcard. Wildcards appear outside the paytable, meaning they bear no winning value, but their mission is not less important. When you trap a Wild inside a winning combination, it is able to expand the latter and add another symbol to it. Good news that Wilds in Reel Thunder can participate in multiple combinations at a time.

Scatters: A pitiful moment about Reel Thunder’s Scatters is that they have nothing to offer from bonus perspective. There are just three paying combinations of them – from three to five Scatters on a line to bring a reward multiplied by a total number of coins wagered. Look out for a bike horn, that’s going to be your Scatter. However, without fancy stuff inside, Scatters seem to appear quite often, so the bonus agenda can be shut down.

Firstly Reel Thunder was released in December 2013, and after a few patches integrated the machine has never get seriously changed. On the layout, Reel Thunder is a 5x3 format, with nine fixed win-lines. The game stores a huge jackpot despite having such a small number of paylines – gamblers can hope for a whopping pool of 20’000 credits as a reward for being extremely lucky. The machine keeps a primitive gameplay, and the only bonus entertainment here is within Scatters and Wilds.

Some players think that Reel Thunder is a way more expensive than it should be. Since there are just nine lines on the docket, bets look tremendously for ‘a penny slot’: coin values range from 0.25 to 2 credits, making max and mix wagers to be 18 and 2.25 credits per hit respectively. More than 2 credits for a round seem an unreasonable deal for a machine without proper bonusing, but so it goes. Poor staking is probably the biggest disadvantage to Reel Thunder.

The game’s paytable is comprised of 12 symbols in total: ten regulars, from trashy icons to high paying pig in a biker’s helmet, and two specialties which have been described in the features section. Hopefully, there are no card characters or other ugly options, so Reel Thunder is pleasant to watch with all these meaningful pictures to revolve around the screen. The slot machine offers three types of symbols: ‘pink’ high-class, ‘red’ mid-win and ‘yellow’ low value.

As you can see, Reel Thunder does not leave an impression of a game that can live for centuries. It utilizes quite a common theme, builds in commonplace features and even manages to rob players under nine strings lineup. However, it does not mean Reel Thunder is a bad slot machine because as soon as visuals, music and other effects begin to work together, you get your piece of quality performance.